Make sure your house is safe from flood 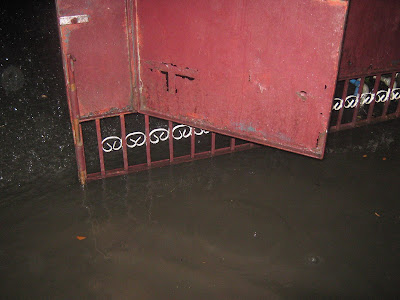 Were you awake last Saturday morning, around 3am when it rained very hard? My mother in law pounded at our door around that time, telling us that street outside was flooded, and should the rain continue to pour, we would need to evacuate.


The picture above is the gate to our house here in Quezon City. The gate is a few feet away from the street, and we are elevated. So if you are on the street, that flood water would be up to your knee. That was how high the flood water was. My house is the 3rd one inside the compound. During that heavy rain, some water already seeped inside the house and we had to move up some furniture. The bathroom was flooded also and I was dreading that the continuous rain pour would finally make the flood water in the bathroom overflow. Ewww! Good thing, the rain seemed to have lost its anger by that time! Whew! Come daylight, we had to clean the floor with soapy water and dry it with electric fans. The flood water left some mark on the wooden walls. Thankfully, no furniture were damaged. Outside, we placed the plants back to their proper place after rescuing them from the flood. And later during the afternoon, it was sunny alright and no trace of the flood was left except for the sleepy adults who held vigil during the flood. It was the first time in eleven years that the flood reached my house. 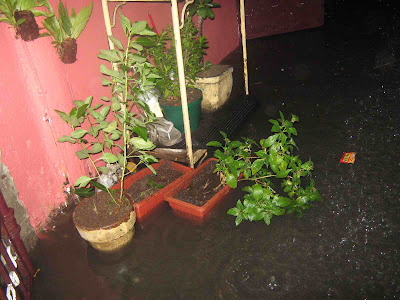 Good thing our house in Montalban is free from flooding now. Before, during the typhoon that devastated Quezon, residents told us that flood water almost reached their roofs and they were all so scared with the rush of water during that fateful night. There were live pigs and cars floating around. Many residents sold their houses after that. But the developer reinforced the perimeter walls and there have been no flooding inside the subdivision ever since.

So when you choose a house, make sure that it has no history of flooding. Check the location. Otherwise, you will be in for a lot of headaches!
at August 25, 2009

Email ThisBlogThis!Share to TwitterShare to FacebookShare to Pinterest
Labels: location