I have been blogging about how we are building this house one hollow block at a time and since this is our first time to contract labor, we relied mostly on trust and the recommendation of our neighbors. Sadly, we learned some things the hard way. 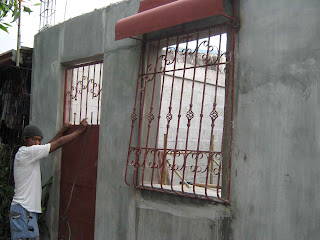 You must specify exactly the inclusions of the amount you are paying for. For the roof in front, we only discovered that the GI sheet at the side for additional protection from rain was not part of the package. We paid additional money for this. Then for the walls at the back, the contractor told me to buy flexible hose for the wires so that they will be in place before he cement the walls. Then when we came back, he did not put them saying it was not part of the package. Then, he also measured the window and the door at the back and gave the measurement to the guy doing the grills. When we came back, the door and the window grills were not yet in place. The other guy couldn't weld them yet because the walls were rough. He was told by Manong that finishing the door and the window walls were not part of the package either and so we had to pay another person to do it. Good thing Manong is in the province, because if I had been told while he was there, I would have raised hell. I still owe him some money that was left from all his vale so I will just deduct the payment I made to this other guy.

I know that we shouldn't be too trusting but what can we do? The Manong is the father of our next door neighbor and when I told him that the delay to the putting uop of the door and window was because of his father, he couldn't look me in the eye. I told him how could it be not part of the package when he knew that a window and a door will be welded in the walls? He was the one who took the measurements, so if he wouldn't finish that side of the wall, surely, he knows that the other part of the job will be left hanging. Prior to this, he was also complaining that he was "lugi" since he has to feed his men. I just ignored him since this was "pakyaw" and that was not my problem since he was the one who quoted the price until we reach an agreement. Although we are satisfied with his work in the beginning, we just noticed that the more vale he made, the sloppier the work has become.

I think we will just chalk this up into a learning experience, an experience which costs us some money. But hey, this is a small price to pay for a Dream House, right?