My friend Rona just moved into her dream house in Somerset in Pasig and we were there to visit last week. We were already there one time before the turnover and I was amazed at the difference that the designer lighting made. Rona opted for contemporary lighting and the ones she got have remote controls. The kids were happily showing off the different colors that the chandeliers made and we were all awed by the over-all effect. There was mood lighting too, which we used while we were thinking back over our college days and it did wonders to the ambience. I think the modern lighting set her back several thousands of pesos, but I know that it was well worth it. Aside from the chandeliers, Rona also have matching pendant lamps and wall mounted lamps that really compliment the room's style. We really loved what she did to the house and we told her so. I know that she is very proud of her house and I am very happy for her for realizing this dream. I know that I want this for my house as well because they do compliment the over look. I just need to save a little more and I know I can soon afford these discounted designer lights for my own dream house!
at July 28, 2010 No comments:

Now that the family vacation to Boracay is done and life is returning back to normal, its time to visit the dream house once again. We will go there this weekend and work our schedule on painting the house and putting up the ceiling. I will also bring some appliances from our house, like the television set and the plastic storage boxes that I bought from the mall. If you give me a free hand and unlimited budget to decorate the house, I would fill it with homey and nice stuff. I now want white paint to emphasize the furniture and the simplicity and elegance of the house. I want clear and defined lighting. I want a pocket garden, or a zen garden. I want the latest gadgets and biggest and coolest entertainment system. I have it all planned in my mind and I can picture it as if I have them all in front of me. Of course that is, if money is not the issue. I can use credit cards with no annual fee but there are bad credit cards out there! I dont want to be exposed to unnecessary trouble especially now when I am not aware of new credit rules. But since money is the major consideration of all, I will get back to reality and think of ways to save up for those things instead At least, I don't need to think of ways to pay for those stuff once I paid them cash.
at July 22, 2010 No comments:

Email ThisBlogThis!Share to TwitterShare to FacebookShare to Pinterest
Labels: floor

A Fund Raising for My House?

The idea for a fundraiser to build my house has entered my mind several times already during the past year. I know that there are easy fundraisers out there, but I believe that my need is not as urgent as others. That is what's stopping me from doing it. My sister's high school class did a magazine fundraising and donated the proceeds to their school to buy books and computers. I believe that to be a worthy cause and I gave some money quite generously. I dont know how people would feel when somebody asked them for money so she could build her house. I know that I will feel like I am being scammed, ha ha. But there are people who have been funding arts and I applaud their efforts. I think that if I were to make a fundraising for this house, it must be like the idea behind Gawad Kalinga where future owners of houses donate their time and effort to build their own and then help others build their houses too. I have joined in my company's Gawad Kalinga porjects and felt very good about myself for helping other people realize a dream of owning a decent house. I just hope that I can think of something creative and worthwhile to raise some funds for my own dream house.
at July 20, 2010 No comments:

I was one of those people who are not yet comfortable with the idea of shopping online. I still prefer buying products that I have touched and smelled and felt to my hearts content. But I know that online shopping is a fact of life and it will be here to stay. I guess fighting it would be pointless, even futile. So when my friend told me that there are lots of incentives to shopping online, I told here to go ahead and convince me. She told me visit Savoo and check out the many money saving ideas I could learn from there. And I know she was right when I saw these online vouchers and was instantly hooked! I didn't know that there were so many discounts available for online shoppers. Had I known about these earlier, I would have bought all of my gadgets online. Even refutable sellers have online stores now so I know that it is silly to be afraid of buying items on the internet. And even shipping is almost always free when you buy them online. Now that I know these great online shopping ideas, I can also tell my friends about it and convince of the benefit of shopping online.
at July 20, 2010 1 comment:

When I woke up from a dream that I won the lotto jackpot, my first thought was to look up some listings of Naples real estate and choose the best that money can buy! I want a house near the beach so that I can wake up to the sound of rolling waves. At night, I want to be lulled to sleep by the waters gently lapping the beach. I am sure there are lots of available offerings at Naples Florida real estate especially if my dream that money is no object is true. Then again, it need not really be just a dream. There are condominiums and family communities that can be ideal for those who want to try living in Naples. For the truly rich, there are gated and luxury communities to choose from. It would be nice to live in this wonderful place of sun and sand and at the same time where all the comfort of living can be had. It would be like living in a vacation place where you will never want for the comforts of your own home. So I think I either get back to sleep and dream about this wonderful place all over again, or get to work so I can at least save enough t make that dream a reality.
at July 12, 2010 No comments:

I Miss my House! 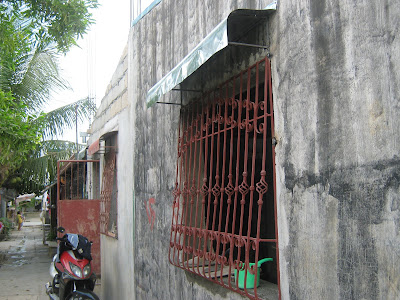 I miss my house! Its been more than 2 months since we last visited but we are so busy we really cant go there now. Its just an hour away from where we live now on motorcycle, but we dont have the funds to buy the paint supplies and there is not much to do there yet anyway so we haven't visited. Maybe will share the painting pictures after next week. We hope to be able to do something by weekend of July 24. We are going to Boracay next weekend that's why. But I sure miss my house!