My house is located at the boundary of the village and this is the view from my house the Sunday after Typhoon Falcon. The water from the flooded river reached the field up to half of the wall. My neighbors had to move their stuff from their house to another house with a second floor and then they went to the evacuation center before night fell. The following morning when they went home, they were very thankful to know that we were not flooded once more! But I don't think it was good news! 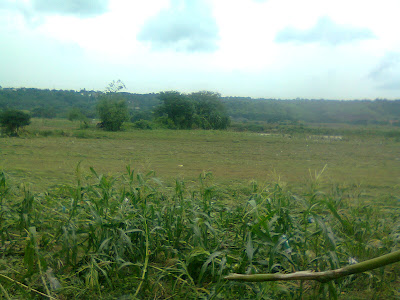 I felt that Typhoon Falcon was nowhere near Ondoy's intensity but why did the water level reached that high? During this time, our other house in Sta Mesa was also almost flooded and my husband and I were already worried. But can you imagine my worry if my kids and my mom were here and we cant get to them on time? And what if they had to evacuate without us? Id another Ondoy was to happen during daytime and we were already living here, we will probably not wait for the water to rise and just leave the place already? But what if we were at work? Or what if it happened at night? Oh my God, can you imagine the worry?

So at this time, plans to move next year are under serious consideration. And this post is to be continued.