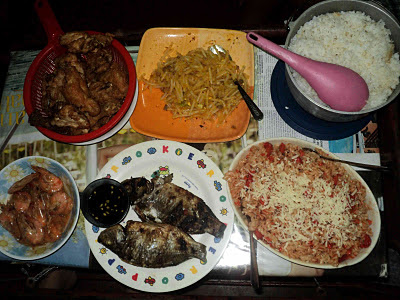 These is our humble Christmas dinner feast, each a request from a member of the family. The palabok came from my sister-in-law's kids. 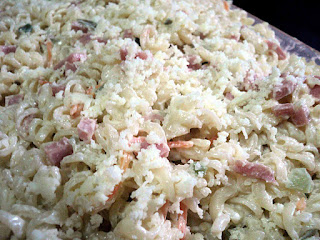 This spiral salad is my favorite. I bought 5 kilos of spiral pasta on sale at our office and I think I have enough pasta to last me a year! 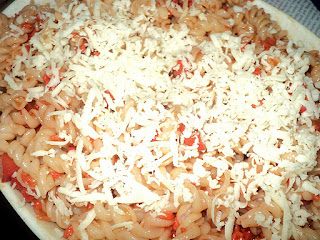 This spiral pasta is for my mother. We also gave some to our neighbors and then we also had it the following day. I also had this for lunch the following Monday! 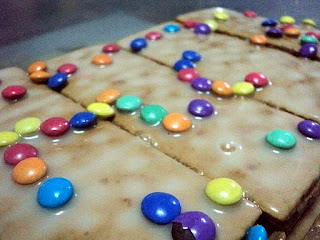 This graham mango cake is my eldest son's request and it was the biggest hit of all. They would have finished it in one sitting if I didn't intervene! 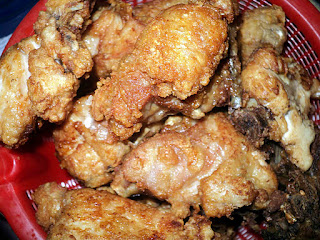 Danniel asked for the fried chicken and with Mang Tomas, it was perfect! 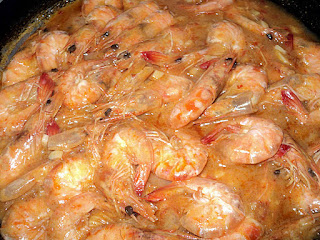 And this sweet, chili shrimp is requested by my sister Kris. I will make a separate post on it later. Not on the individual picture but on the table spread above is the grilled tilapia and bangus that my husband requested. It was just a simple dinner feast and would you believe that we also have enough for breakfast the following day? This coming media noche, requests are already coming in and I am excited for this feast as well :)
at December 29, 2011 No comments:

Tutubi are dragonflies. I have always been fascinated with them and have even named my first blog, To Be, To Be, Tutubi, about them. These photos were taken during my daughter's field trip in Bulacan and the reason why I put them there is because when I retire in maybe some 30 years from now, I would like to be able to stay in a home where dragonfly are still present. 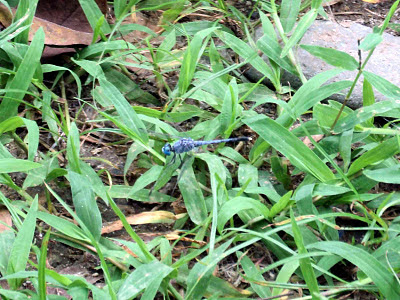 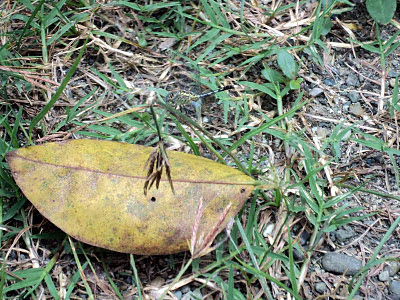 I want to be reminded how to be carefree and how to be alive, when that time comes.

Email ThisBlogThis!Share to TwitterShare to FacebookShare to Pinterest
Labels: life

Finding A Home in San Diego

Last week, we bid goodbye to our dear friend Steve and his family who are now moving to the US for good. Their petition for citizenship has been granted and while it is difficult to move to a new place, they are excited for this new adventure in their family life. Good thing my friend Steve is very organized. Months before their move, he has already checked out the San Diego Real Estate and tried to look for a home that will fit their family's needs. Since this is going to be a new place, he wanted a home that would be near everything: church, school, malls and their parents so he checked each San Diego Homes for Sale. When he couldn't find what he was looking for, he checked out other listing at San Diego MLS and luckily, found their dream home! It has everything that they need and wanted and was just perfect for the whole family! I actually was in awe of the home he found for his family that I went and check the listings for some ideas too, ha ha. While I know that Steve is sad to leave the country, he is open to the new challenges that this move will bring to his family and we wish his family the best.
at December 13, 2011 No comments: 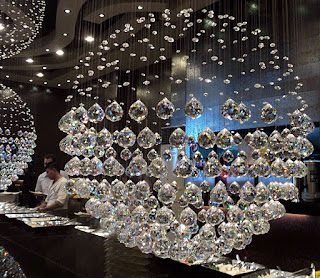 If I were to dream a little bigger for my dream house, I want something as elaborate as these chandeliers hanging at the buffet area of YakiMIX in Podium. I love how it made the place look like an expensive hotel lobby. 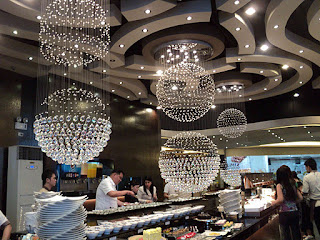 It looks very classy. I love the ceiling as well and would love to have something like that in my dream home. 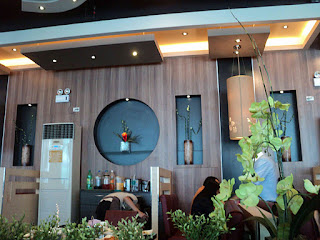 I Hate You, Manila Water

The last time that we went to our house in Montalban was in October and that was two months ago. We were either too busy, too lazy or something else, but we didn't visit the house for exactly two months until yesterday. We came from QC Memorial Circle for some family fun and exercise, and then we went to the house, hoping to rest after cleaning up, because we were sure was in such a state! Unfortunately, I didn't expect that Manila Water will disconnect our water service even though we have no consumption for those two months! Our neighbor said that a team from Manila Water was there early this week to disconnect the service and since nobody was living in our house, we were not able to run to the nearest payment center to settle our dues just like they and most of our neighbors did. 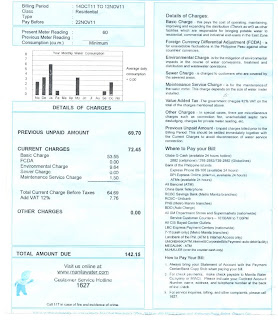 Our bill for the month of October was P69.70 and for November, P72.45 which was for "minimum" (meaning zero) consumption. I can understand that they will disconnect the service for unpaid water that you use but when you didn't use even a drop of their water, the least they could do was to call your attention first! And they even have the gall to bill you for reconnection fee of P474.36 was was 7x more than our monthly bill! I really hate Manila Water right now. Good thing our neighbors were such great people and they offered their water for us which we use to clean the house! So my husband paid the bill and the reconnection fee at 7-11 and I called the 1627 hotline to tell them that I have paid them already and they should connect my water service right away. Of course, they told me last night that it will take them a maximum of 3-5 days before they connect it, but I wouldn't hear any of it. I called again this morning and was told that they have already reported it to the Marikina Business Office and that I should expect to get a call from them within the day once service has been reconnected. Of course, I will call them again later today if I don't hear anything!

And what is the moral of the story? Pay Manila Water even though you did not use any water? I guess that is the price we have to pay for having such services privatized! And Manila Water must not say that they provide water service because there was no service involved here, just business. Sigh.

Update: As of December 2, 623 pm our water connection has not been restored according to their hotline 1627. Can you imagine having no water for more than 2 days? What if we live at the house and they are taking this long to reconnect the service? I hate you Manila Water!

Another update: Last December 2 at 1048pm, I received a text from 09273286584, saying 'gud pm po. service provider po ito ng manila water nareopen n po ung metero ung nov 30 pa po. pakicheck n lang po ung gatevalve' I groggily replied Thanks, will do that. And then by December 3 at 1059am, I received another text from the same number 'mam gud am po. nareopen n po namin ang servisyo ng tubig nyo wala pong tao. nov 30 pa po. salamat po. So two texts from the service provider but they didnt report it to their 1627 hotline from November 30 to December 2 at 623 pm? Yeah right because I have no way of knowing who is telling the truth: the hotline or the service provider, I will just assume that they just reopened after my irate call on December 2! And I still hate Manila Water!
at December 01, 2011 No comments: