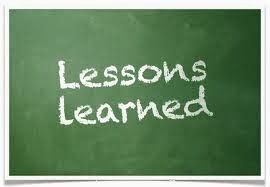 Remember when back in September we had our first lessor in this house? Well, we had our first lesson: Do Not Be Gullible. I had a bad feeling about those tenants when they first moved in because they were in such a hurry.  The guy said that he wants to move right away even if our things were still in the house because he has to go to Davao and he wants to leave his family settled at the house first.  He paid the 2 months deposit and one month advance that we require right away.  Unfortunately, that was the only payment we got from them! He also paid for the balance of the payment for the dining set after deducting the cost to us, but when they left, they took more stuff from us that we left in the house such as the stereo, estante and electric fan. And they left 2 months worth of unpaid utility bills! But whenever I feel bad about what happened, I just think that we are still lucky that the house was still intact (except for 2 broken windows and shower head) because the guy was apparently a con artist! He actually left a host of loans and unfinished paid projects (he was a contractor) and even managed to swindle a construction supply owner some P65K worth of materials.  Yes, I am actually thankful that they are gone!

For our current lessee, I hope that this will not happen again.  They were actually recommended by the neighbor who looks after the house for us so I hope we will not have any problem this time!
at January 15, 2014